OK - Take number 5?
I think this is take number 5 at working with SmallTalk. I'm using Cincom VisualWorks. It was demo'd by [Carl Gundel] at a Seattle Software Crafter Meetup.
I tried Object Studio previously to ... frustration.

I'm still expecting some trouble... Part of the reason for blogging along is to help Suzanne identify ways to make it easier to get into Smalltalk.
Starting up Visual Works I'm greeted by the following. 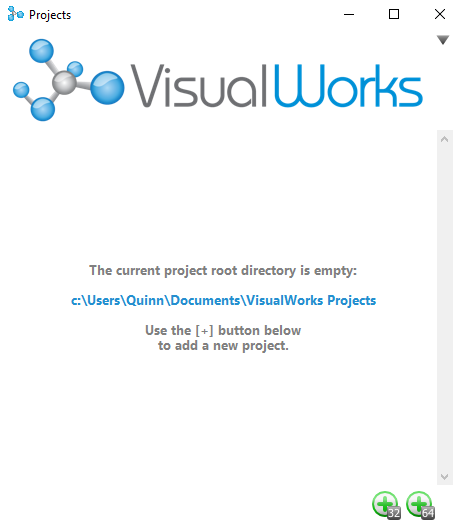 This is leaps and bounds better than any other SmallTalk programs I've launched. What do I do here? It FUCKING TELLS ME!!!

It even uses familiar terminology - Project
I think every other SmallTalk tool has used Image which made no sense coming from a different ecosystem.

Clicking the new Project; give it a name and we get these windows 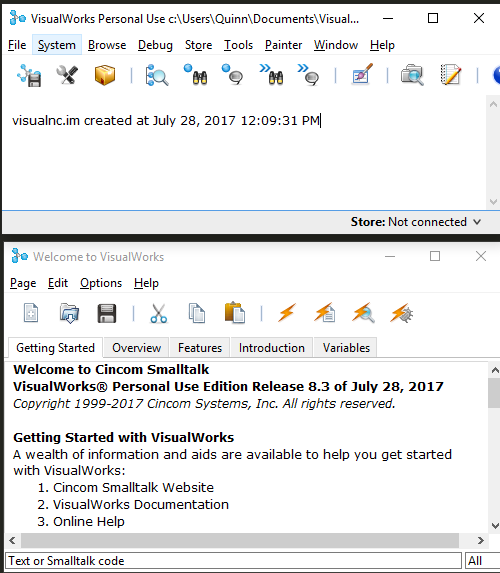 The top window gives away the image nature of SmallTalk with visualnc.im created.

Having no idea what to do... still... "Getting Started with VisualWorks" in the second window seems like a solid place to start.

I'm not going to do pictures of the entire thing; but they did fix the broken documentation link I found
http://www.cincomsmalltalk.com/main/products/documentation. Unfortunately... It lies.
The docs aren't online... "Documentation for the product is installed with the product in the doc directory."
I don't know where this is installed - I did default.

I've gotten quite a few comments written up for an email to Suzanne about the documentation challenges. Enough challenges that I want to quit...

But I shall press on.

I find it strange that the getting started with Smalltalk doesn't start with "Here's how to write unit tests"... I also suspect it's such a part of their development it's so obvious it doesn't need mention... I need it mentioned.

OK - Instead of creating the test class first; might be better to create the FizzBuzz class first... because there's a "Add test case" which creates the test class for me.
Not sure how to run the test yet... Oh... neat. Hidden in the bottom right.

I just don't have good information on how to do things. I can run a test... But ... still not clear.

I need to restart and follow the instructions in the documentation a bit better to see if I can get the unit tests to be more informative.

I got SUnit loaded... started to write a test. Wasn't sure about something, navigated away... tried to go back, test was gone. Guess I didn't save it?
Write it again... Save it - there's a compile error; of course. I'm not sure what I'm doing.
Go look at other code. Go back to test... well... it's gone again...

Apparently I can't go away from non-compiling code ... sigh
This is where I call it quits on attempt # whatever. It's blowing away my code as I struggle to learn the language and environment... throws up hands I don't want to be in a tool that punishes me for not knowing what to do.

I want to learn. I want to be able to do it... This is just not a smooth or pleasent experience...

Something that's been brought up to me, repeatedly, is if I can…